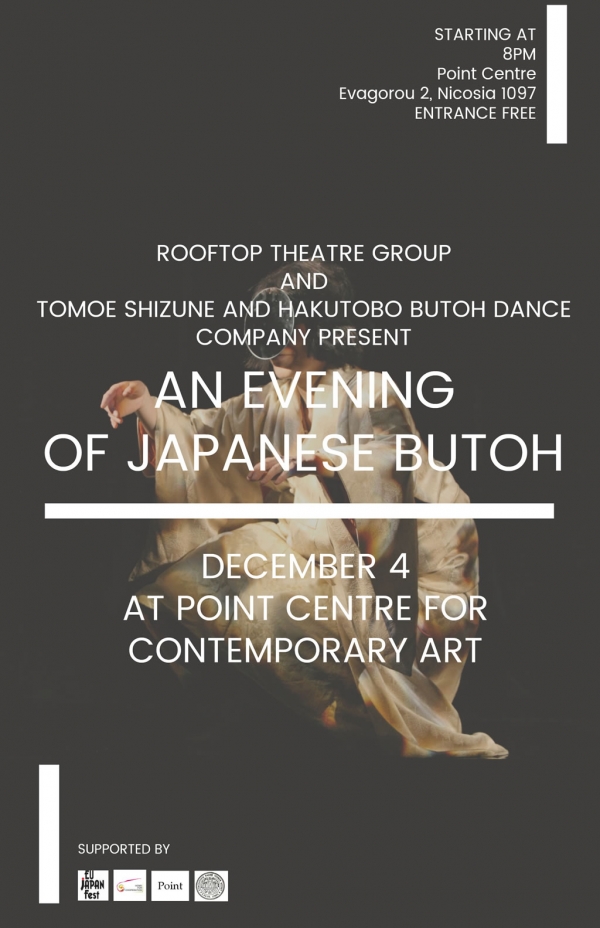 Rooftop Theatre Group, in collaboration with “TOMOE SHIZUNE & HAKUTOBO” Butoh Company, and the support of the EU Japan festival (through the Home for Cooperation), hosted a weeklong workshop at the E.KA.TE. space starting on Nov. 27th, 2017, on the dance /movement performance discipline of Butoh, with a final public performance held at Point Centre for Contemporary Art on Monday 4th December, 2017 at 8pm. The workshops and performance were directed by Sanae Kagaya, a Butoh dancer and member and practitioner of the TOMOE SHIZUNE BUTOH method, created by the “TOMOE SHIZUNE & HAUTOBO” Butoh Company.

BUTOH, Japan’s original modern stage art, is an avant-garde dance movement that emerged from Japan in the 1960’s that expanded to becoming an internationally recognised art form. Master TOMOE SHIZUNE, founder of the visiting Butoh company, is the only Butoh dancer among those who learned under one of the original creators of Butoh, Hijikata Tatsumi, who then inherited and further developed the art form establishing the “TOMOE Butoh method”. The upcoming workshops will provide an opportunity of experiencing the TOMOE BUTOH method to learn a comprehensive creative method of Butoh. Their work becomes relevant for Cyprus and Rooftop Theatre, as they mention, “we believe that this opportunity will contribute to Peacebuilding through the development of the techniques for creative physical expressions”.

“It’s is an honour and wonderful experience to have Kagaya Sanae carrying out these workshops, I really look forward to the experience and hope that we can develop future works from our experience”, says Polly Flourentzou, a Rooftop Theatre Group board member and lead of the organizing team for the event. The collaboration for the upcoming workshops is under the generous support of the EU Japan Fest, and through the Home for Cooperation.
The public Butoh performance by the artist and workshop participants was hosted by the Point Centre for Contemporary Art, Evagorou Avenue 2, Nicosia, on Monday 4th December at 8pm.

The workshop was made possible with the kind contribution of Synergeia Media and the technical support by Pandelis Kotsireas.